It is well-known that Australian soils are low in phosphorus. What is not so well-known is that many of our soils are also low in potassium. As a result, the animal manures that we increasingly use on our gardens in place of chemical fertilisers are also low in potassium. This has led to an increase in the incidence of plant diseases. Although potash could never be described as a fungicide, its correct use can certainly minimise diseases such as blackspot, rust and powdery mildew. These appear most visibly on the leaves and fruit of affected plants, but can affect any part.

Potassium takes part in more than 40 enzyme actions which help control many plant functions. Of potassium's multiple roles within the plant, one important one is its work in building cellulose, a component of plant cell walls.

When using organic fertilisers, look at the analysis on the back of the bag - if it contains less than 3% potassium, you should add some to it. About 10% sulphate of potash will usually do the trick. Potash can be applied pure, at a rate of 15g per square metre, for a quick fix.

For plants that are particularly susceptible to disease, such as roses, it's a good idea to apply about 150g of sulphate of potash to each bush at 3-4 monthly intervals.

Sulphate of potash is known to improve the quality and the colour of flowers, probably because of the increased enzyme activity. It also enhances the formation of proteins and sugars, probably because it influences photosynthesis, the process by which these sugars are made.

In frost-prone areas, plants treated with potash are better able to withstand the frost because of the higher cellulose content in the cell walls. Plants with slender stems and large flower heads such as Iceland poppies and Gerberas will hold their heads erect if adequate levels of potash are used.
Posted by propertymaintenance at 1:27 PM No comments: 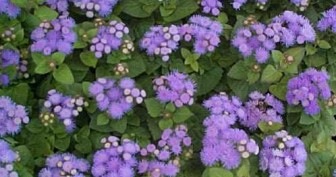 Clusters of fluffy blue flowers on neat, compact, low growing plants. They are frost tender but otherwise tough plants which will bloom for months. Feed and water regularly and pick spent flowers.

Plant in spring to summer to flower in spring, summer and autumn. Plant all year round in tropical climates.

Best in full-sun. Will grow in semi-shade.

Posted by propertymaintenance at 1:29 PM No comments: